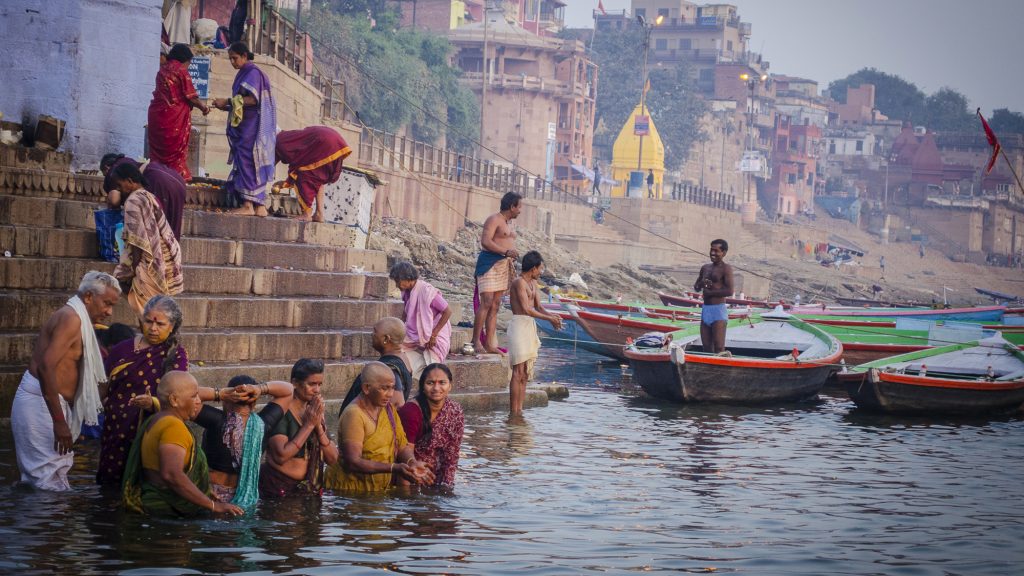 This classic India tour enthralls the visitor with its amazing cultural sites and ancient histories. The lands of Northern India have been at the epicenter of the nation's history for millennia and home to several of India's most exciting and popular travel destinations. Diversity abounds, be it the scenery, sights, or languages, as the North is home to a wide variety of cultures, peoples, long-gone empires, and religions.

On your trip, you will sample some of this diversity as we travel from Delhi, a lively capital of seven empires and a melting pot of cultures and style where colonial Raj-era met the hustle and bustle of Mughal Empire. We also visit Jaipur, with its colorful markets and legendary fort and palaces, this is perhaps the most romantic city of the North. The Taj Mahal needs no introduction, but it never fails to surprise even the returning visitor.

Holy River Ganga, called the "Mother Ganges" for millennia by the Hindus, is known throughout the world, flowing for 1,560 miles from the Himalayas to the Bay of Bengal. This river is life, purity, and a goddess to the people of India, who believe that anyone who touches these purifying waters will be cleansed of all sins. We will cruise on this great river for three days and explore life on its banks as it makes its way to legendary Varanasi.

While you can start this trip any day, the best time of year is October through April.

Welcome to India!  Arrive at the Indira Gandhi International Airport.  On arrival, our airport representative will meet you and transfer you to your hotel.

Day 2: See the best of Delhi

Following breakfast, you will enjoy a full day of guided sightseeing in New and Old Delhi.  The capital city of modern India, New Delhi, is a well laid-out main metropolitan area built by the British when they moved their capital here from Calcutta in 1911.  New Delhi blends internationalism and tradition, with many interesting museums and art galleries here.  We will drive past the President’s Palace and visit India Gate in the Lutyens’ Imperial City.  We will visit Qutub Minar and Humayun’s Tomb that pay homage to the mighty Afghan & Mughal Empires.  Later, we will head out to explore “Old Delhi” with its narrow dirt roads, its myriad people, and inexpensive and colorful bazaars that keep alive the traditional workmanship for which Delhi has always been famous.  Then, driving past the Red Fort, we will trade our motor vehicles for bicycle rickshaws, which will take us into the heart of Chandini Chowk (the silver square - so named because of the silver merchants). Negotiating alleyways, which seemingly get narrower and narrower, we will end up at the Jama Masjid, the largest Muslim mosque in India.

After breakfast, you will start your approximately six-hour drive to Jaipur, taking in the countryside along the way.  Jaipur is popularly known as the "Pink City."  With its rich and colorful past, resplendent with tales of valor & bravery, Jaipur is now one of the most important heritage cities in India. The city was founded in the year 1728 by Maharaja Sawai Jai Singh II, the ruler of Amber.   After arriving in Jaipur, you will have the rest of the day free to wander around the famous markets of Jaipur.

Day 4: See the best of Jaipur

After breakfast, we will take you on a half-day excursion to Amber Fort. On the way, we will make a photo stop at the Palace of Winds, the Hawa Mahal. A five-storied building, with a 25-centimeter thick facade from the 18th century, the Hawa Mahal has 953 windows and niches so that ladies of the royal family could see the procession and events in the city without being visible to the people. We will then proceed to the Amber City Fort, situated 130 meters high, with the Aravalli hills around, about 11 kilometers north of Jaipur. Amber City was the ancient capital of the Kachhawaha Rajputs until 1037. You will get to enjoy an elephant ride to the top of the Palace fort.

In the afternoon, we will visit the “Pink City” of Jaipur. The City Palace occupies the center of Jaipur and now houses the Royal residence and museums with collections of textiles and costumes, armory, manuscripts, and paintings. We will also visit Jantar Mantar (1728-34), a collection of several architectural astronomy instruments, built by astrologer Jai Singh II. The instruments are built of stone with marble facing on the important plains for measuring the harmony of the heavens. Each instrument serves a particular function and each gives an accurate reading.

After breakfast, we will drive to Agra.  On the way, we will visit Fatehpur Sikri, the beautiful and deserted medieval city built by Akbar the Great in the 16th century to serve as the capital of his vast empire.  Akbar built the city to celebrate the birth of an heir, the future Emperor Jehangir.  After 16 years, a water shortage caused the capital to be moved back to the Red Fort in Agra.  The dryness that plagued Akbar and forced him to abandon his dream city is what has perfectly preserved this moment of Mughal history and exquisite memorial to the genius of Akbar for our generations.  After Fatehpur Sikri, we will then proceed to Agra.  In the late afternoon, we will drive to the other side of the river to see the setting sun on the Taj Mahal.

We will view the Taj Mahal early this morning. The Taj Mahal is best experienced at sunrise when the light reflects off the marble to give it a magnificent hue. The Taj Mahal was built by Emperor Shah Jahan over a period of 17 years, starting in 1632, in memory of his beloved late wife Mumtaz Mahal. A UNESCO World Heritage site, the Taj Mahal is one of the wonders of the modern world and you will be enthralled with its ethereal beauty. Note: the Taj Mahal is closed on Fridays.

After breakfast, we will proceed to Agra Fort. Agra Fort is another dimension to the city that attracts tourists in hordes. The Agra Fort was built by Akbar in red sandstone when he was through with the consolidation of his power. Agra Fort functioned both as a military strategic point and as the royal residence. Many of the palaces inside the fort were later added by the next generations of Mughal Emperors, like Jahangir and Shahjahan.

In the afternoon, we will visit Itmad-Ud-Daulah's Tomb, one of the Mughal mausoleums in the city of Agra. Along with the main building, the structure consists of numerous outbuildings and gardens. The tomb, built between 1622 and 1628, represents a transition from the first phase of monumental Mughal architecture - primarily built from red sandstone with marble decorations. In the late afternoon, you are free to wander around the Sadar Bazaar.

In the morning, we will transfer you to the Agra railway station to board the train to Lucknow (AGC/LKO - Intercity Express: ETD/ETA: 05:50/11:45 hours). Lucknow, once one of the foremost cities in India, was renowned for its grand Nawabs who loved the arts and architecture and developed a refined court cuisine. For the British, Lucknow was more commonly associated with the start of the Indian Uprising in 1857. Today, Lucknow is the capital of the state of Uttar Pradesh, one of the most populous states in India. Although the era of the Nawabs is long past, many of their fine monuments remain, including Bara Imambara and Chota Imambara, whose unusual design and decor should not be missed. You will also walk in and explore the old city.

After breakfast, we will drive approximately five hours to Allahabad. We will start the tour by visiting Sangam, which literally means confluence. Sangam has been named so because it is situated at the confluence of Ganges, Yamuna, and a mythical river named Saraswati. Sangam is considered to be one of the most sacred spots in the Hindu religion and is the site for Ardh-Kumbh and Kumbh Mela, pilgrimages of faith that take place every six and 12 years respectively. Pilgrims come here all year-round for the holy dip. You will also visit the Allahabad Fort that stands on the northern banks of Yamuna, near the confluence. Emperor Akbar himself commissioned this magnificently designed fort in the year 1583. This fort was considered among the best garrisons in the entire Mughal Empire, but little is left of that grandeur today. The fort has massive walls and three gateways that are flanked by high towers.

After breakfast, we will drive to Sailing Point on the Ganges River. You will ride on the river on small country rowboats, which are large enough to comfortably accommodate three seated persons on cushioned planks. Two rowers will guide each boat.

In the evening, you will land on shore and camp by the banks of the Ganges. Overnights will be in two-person tents, with kitchen, restaurant, and toilet tents, along with a full crew.

You will have a full day to travel down the Ganges.  During your journey, you will visit some of the most remote rural villages on the banks of this ancient holy river.  This region is one of the most traditional Hindu regions in India.  The fascinating caste system still holds its vice-like grip here.    We will visit the houses of various castes and see how they live.  Yadavs, Thakurs, and Brahmins all will be identifiable depending upon which part of the village they live.  You will have the opportunity to witness rituals relating to the river Ganges.  Overnight again along the holy river's banks.

Day 11: Finish the cruise, and explore the holy city of Varanasi

In the morning, you will continue your journey down the Ganges.   By mid-afternoon, you will arrive at Varanasi.  You will then enjoy a walking tour of the Ghats.  Next, you will take a boat ride to see the Ghats from the river, including a visit of the cremation Ghat.  You will also witness the evening ceremony of the Ganges River.

In the early morning, you will experience the life of this ancient city. Your boat passes along some of the 100 ghats, with numerous palaces built by Hindu kings. You will witness the early morning Hindi rituals being performed. After breakfast, we will drive to Sarnath, 9 km from Varanasi, one of Buddhism’s major centers in India. Buddha gave his first sermon after attaining enlightenment in Sarnath.

At the right time, we will transfer to the airport to board your flight to your onward destination.  We can help with a Goa extension for any travelers interested in some beach time.