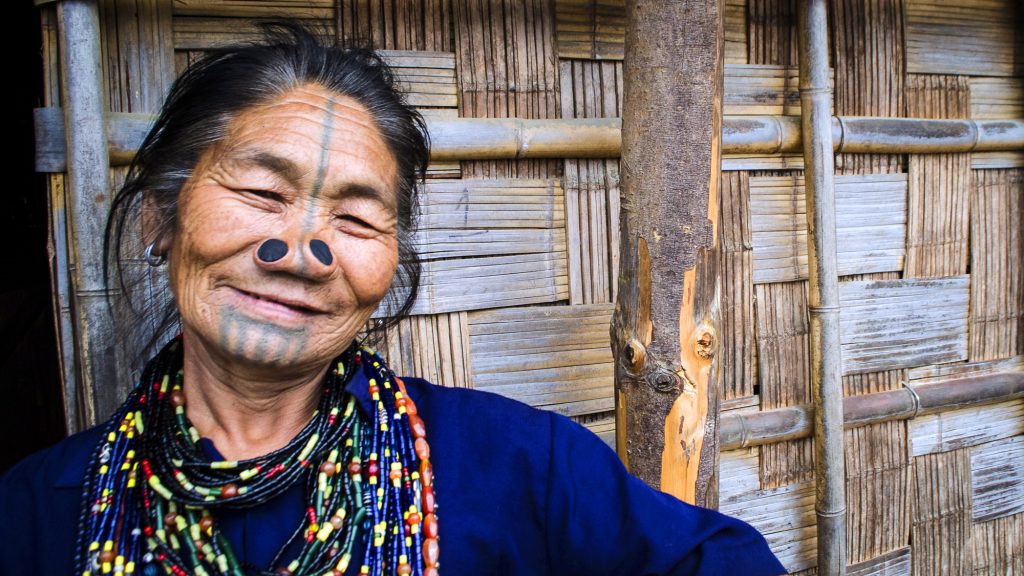 Tucked away in the far north-east of India, wedged between the borders of Bhutan, Burma and Tibet, Arunachal Pradesh is India's newest and least-known state. Arunachal Pradesh is also known as the "North East Frontier Agency" or the "Northeast States," along with Assam and Nagaland. Except for occasional forays by administrators and anthropologists during the time of the British, nothing much was known about this area by the West for most of the 20th century!

These lands never belonged to ancient India. They were, and still are, peopled by unique Mongoloid and Mon-Khmer peoples. The people here are animists (except the area of Tawang where they adopted Buddhism). In the Highlands, wild tribes enthusiastically practiced indiscriminate headhunting until as late as the fifties! To the north, Mongoloid tribes are today still new to encountering travelers from "civilization."

Your journey will introduce you to the Nagaland and hilltop villages. Along the way, you will see an Assam tea plantation, Konyak "head hunter" tribes, the Majuli islands, as well as Hong and Apatani villages.

This adventure comes to a close with several days devoted to spectacular wildlife. The Nameri Wildlife Park is fantastic for viewing rare birds. The Kaziranga Wildlife Park, sprawling over 430 square kilometers, is also home to over 300 species of birds, as well as wild elephants, Asiatic wild buffalo, tigers, leopards, sloth bears, and many deer species. The park is also the habitat of the endangered great Indian one-horned rhinoceros.

Upon landing and clearing customs in Calcutta, we will greet you and transfer you to your Calcutta hotel. The rest of the day is at your leisure.

You will take the morning flight to Dibrugarh where we will greet you at the airport and transfer you to your hotel. On the way to the hotel, we will see tea gardens. Assam tea is considered the finest strong tea and majority of Indians drink this tea. We will not be allowed to enter the tea gardens due to security measures, but we will have ample opportunity to see the workers in action.

After lunch, we will proceed to Sibsagar. Sibsagar was the capital of the Ahom kingdom in the 18th century when it was called Rangpur; several temples remain from that period. The town is now a tea-processing town. The most remarkable landscape of the town is the 200-year-old Sibsagar tank, a large rectangular reservoir. On Sibsagar banks are three temples - the Shivadol, the Vishnudol and the Devidol - all three built by Queen Madambika, wife of Siva Singha, in the year 1734. The Shivadol is believed to be the tallesst Siva temple in India, having a height of 104 feet and a perimeter of 195 feet.

In the early morning, we will start our drive to the state of Nagaland (approximately 5-6 hours).  After going through checking formalities at the border, we enter the Mon District.  We will visit Phuktong Village, which has two great Morungs (men’s dormitories).  We will also visit the Angh’s (chief’s) residence.

You will have two full days to explore the colorful tribal area of Konyak tribes who were head hunters in the recent past. We will visit Shangnyu village, which is a prominent village in the Mon district. We will see a wonderful wooden monument measuring 8 feet in height and 12 feet in breadth - believed to have been constructed by heavenly angels. Human beings and other creatures are carved on this monument. Memorial stones are also found in front of the Angh’s Palace. History records that good and friendly relationship existed between the Shangnyu and the Ahom Kings of Assam. Shangnyu Angh used to collect taxes from all the villages under his domain, extending from Sibsagar in Assam to the Wanchos in Arunachal.

We will also visit Sangha to see head hunting trophies and houses constructed in the true Konyak tradition with palm-leaf roofing and the main pillars jutting out. You will finish your day with a evening cultural activity in the village.

We will continue touring the area's remote local villages with your English-speaking tour leader.

In the morning, we will drive to Jorhat.  In the afternoon, you will join your guide for an eye-opening walk around the colorful bazaars of this compelling town.

In the morning, we will transfer you to the pier to connect with our boat to Majuli. We will ride the boat for about 2 hours to arrive at this unique island. On arrival, we will explore the Majuli islands. The world's largest river island is famous for its twenty-two 15th Century "satras." Satras are Hindu vaishnev (followers of Lord Vishnu) monasteries functioning as centers of Assamese arts. The worship of Lord Vishnu is through dance, music, and poetry. The satras take in young boys and groom them. The daily routine includes working in the fields, tending cattle, prayer, discussion, and study. The satras have also nurtured certain arts and craft traditions, which can now be found only here. In the Natun Samugri satra, for instance, one can still find the craft of mask-making; Kamlabari satra still makes the finest boats. We will also explore the villages of the Miri tribes who live on this island.

For added adventure and activity, you can cycle on Majuli island instead of doing the sightseeing by jeeps.

In the morning, we will drive to Ziro.   We will cross two small rivers by boat on our mountain road drive, which cuts through densely forested hills and slowly keeps gaining altitude until we reach the Apatani plateau at 6,000 feet.

Day 9: Discovery of Hong and other Apatani Villages

Using Ziro as a base, we will spend the entire day visiting the Hong and other Apatani Villages.  Everywhere we go, we will be warmly welcomed.  A s E.T. Dalton noted in 1845, “The men do not rejoice in much drapery, they wear a girdle of canework painted red which hangs behind in long bushy tail.”  Just as the tail is the distinctive part of the male dress, so is the nose plug peculiar to the Apatani women.  Each woman aspires to wear the largest possible nose plugs, which are made of wood.  Both sexes extensively tattoo their faces.   Each sect has distinctive features. Their hats, clothes, ornaments, language, and even physical features are totally different.

In the early morning, we will drive to Nameri.  In the evening, we will walk to see the bird life in this scenic wildlife area.  Or if you are interested, you can do some game angling (catch and release) for Masheer fish (additional permit required).

In the afternoon, you will enjoy a jeep safari in the Kaziranga National Park. The park, sprawling over 430 square kilometers in the eastern state of Assam, is one of the last bastions of the endangered great Indian one-horned rhinoceros, whose population was believed to have dropped to just 12 in the 1950s, but has since increased to around 1500. Kaziranga’s stunningly beautiful landscape comprises savannah grassland, the green and fertile plains of the Brahmaputra River, as well as evergreen, moist deciduous and swamp forests, and is also a haven for over 300 species of birds, as well as wild elephants, Asiatic wild buffalo, tigers, leopards, sloth bears, and many deer species. The park is open from November 1st to June 30th.

In the early morning, you will ride an elephant to spot wildlife.  The elephants bring us very close to the big game animals of this park.  You will also enjoy morning and evening jeep safaris in the park to see more wildlife.

In the morning, we will drive to Guwahati and then you will fly to Calcutta.  Upon arrival in Calcutta, we will transfer to your hotel.  You will have the rest of the afternoon and evening at your leisure.

We will transfer you to the airport for your departing flight.