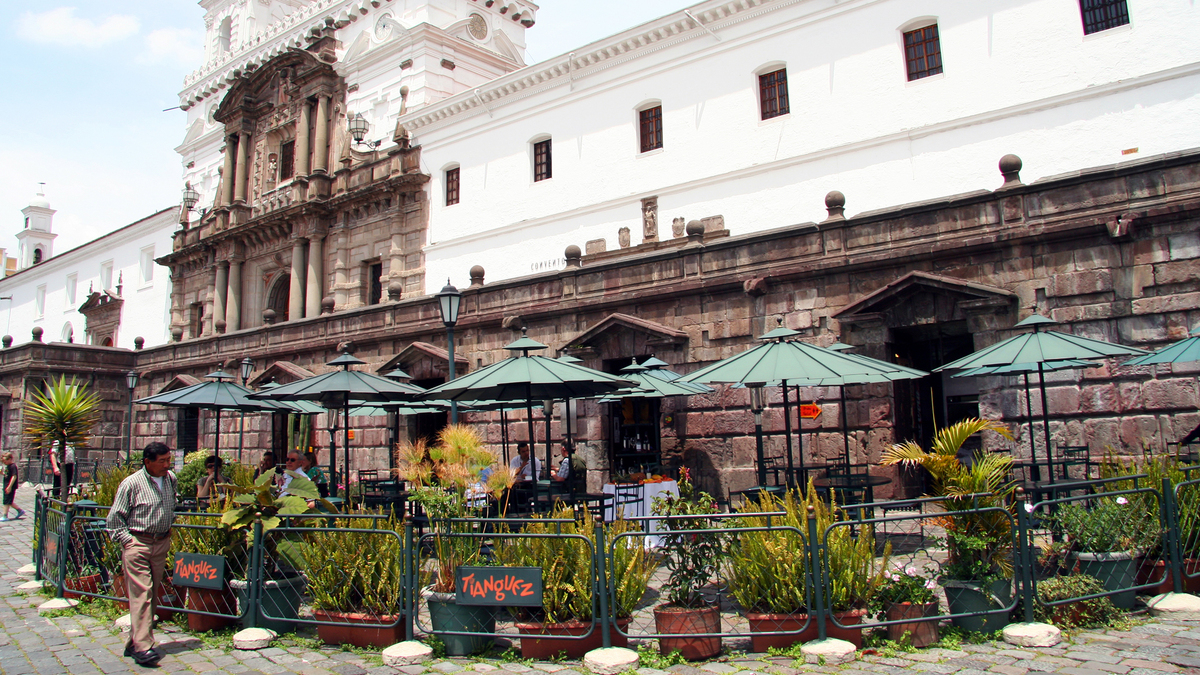 Early departure from Quito south, along the "Avenue of the Volcanoes" Viewing the impressive Cotopaxi Volcano to admire from afar its beauty as well as other towering summits some snowcapped and continue along a series of temperate valleys with some villages and towns like Latacunga, Salcedo or Ambato before turning east heading to Baños, a small and friendly town/thermal bath resort nestled amidst mountains and found midway between the Andes and the Amazon.

Passing Baños we head to Gateway to the Amazon by Agoyán waterfall. We head down into the Pastaza river canyon to the so-called "Route of Waterfalls" where we find Cascada de la Virgen, the Bride's Mantle, Machay, Pailóndel Diablo, all of which lie along the riverbed of the Pastaza and surrounded by green lush vegetation. The tallest waterfall, Pailón del Diablo (the Devil's Cauldron) optional walk down to observe this waterfall from a breathtaking suspension bridge. Return to Baños Technical stop and a brief sightseeing of the village.

Afternoon, drive to the city of Riobamba passing at the foothills of Chimborazo Volcano, the highest summit in Ecuador with over twenty thousand feet and from there to Riobamba for a quick view of the city.

From Riobamba we'll go south to Alausí, along the way see la Balbanera, the first Spanish church built in the country. In Alausí, we will take a spectacular train ride through the Devil's Nose, a true feat in railway engineering of the early twentieth century. Box lunch is provided and then we continue south for some two-hour drive to visit the Incan Archaeological site of Ingapirca, which means "Wall of the Inca" and it is the most important Incan relics in Ecuador.

This citadel was built in the fifteenth century on an ancient route that connected Quito to Cuzco. The Solar Temple and the surrounding buildings follow the system of construction found in the ancient Incan capital. Visit the archaeological site and also the site museum displaying pottery and metal artifacts found, not only at this site but also at the surrounding archaeological findings. We arrive in Cuenca by nightfall.

Cuenca is one of the most beautiful colonial cities in Ecuador and also a Unesco's World Heritage Site. It is a city of facades dated from the last five centuries which have been kept intact due to the unique privilege of being the only city on the Ecuadorian Andes which has not been hit by major quakes. We visit the Cathedral, Main Square, the flower market, San Francisco and Santo Domingo churches and the Central Bank Museum with permanent archaeological, anthropological, colonial and republican art collections, including interesting photography documenting the city's history.

In the late afternoon, we visit a Panama hat factory where a wide variety of goods made from "toquilla" fiber like bags, dolls and of course literally thousand possible hat styles, colors and prices. In the end, we shall have a panoramic look of the city from Turi viewpoint.

Departure from Cuenca to Guayaquil for a four-hour drive across El Cajas National Park, famous for its more than 200 and lagoons, such as La Toreadora where we can see some birds and plants like Polylepis trees.

The highway will take us from 4000 meters down to sea level, making it possible to observe some of the different habitats responsible for Ecuador's diversity: Andean moorlands, the cloud forests and the subtropical and tropical rainforests, along with some tropical crops such as cacao, bananas, sugar cane or rice. Drop off at the hotel or airport.


Prices are Per Person and Valid for Trips through December 31, 2021