Travel ▻ Himalayas ▻ India ▻ 8-Day Tigers to the Taj: The Tigers of India with Khajuraho 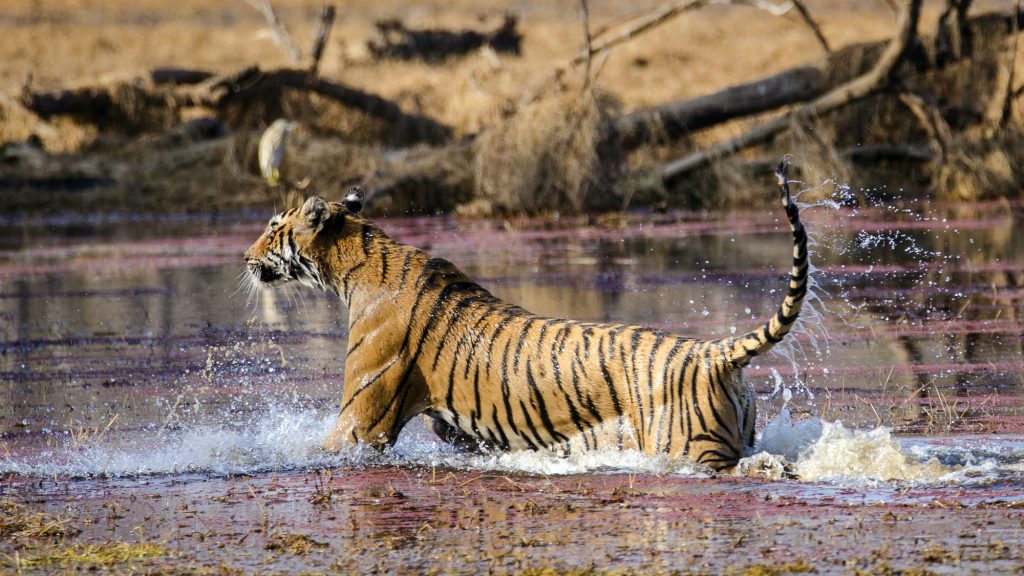 8-Day Tigers to the Taj: The Tigers of India with Khajuraho

8-Day Tigers to the Taj: The Tigers of India with Khajuraho

Explore the central Indian forests while searching for the elusive Royal Bengal Tiger. In this Kipling-country tour, be prepared for a magical encounter with the finest of predators while scanning the dense forest for other wildlife. As an added bonus, we'll visit the intricate temples of Khajuraho, which are a UNESCO world heritage site, plus the world's greatest signature symbol of eternal love, the Taj Mahal. We'll travel by airplane, cars, safari jeeps, and trains on this fun and meaningful journey.

This tour is easy to combine into a custom Golden Triangle and Tigers tour or as an extension to any other India, Nepal, or Bhutan tour. The best time to see tigers is April to June, though the parks are open October through June (closed July - September).

Day 1: Arrive in Delhi and transfer to the hotel

You will arrive in Delhi and we will transfer you to the hotel (rooms are available from 12 pm onwards).

Day 2: Fly to Kanha via Jabalpur

After an early breakfast, we will transfer to the airport in order to board the flight to Kanha (about 1 hour).  On arrival in Jabalpur, we will drive to the lodge in Kanha National Park (approximately 175 km / 3 hours).  Kanha National Park, situated in Madhya Pradesh, is spread over 1,945 square kilometers of dense Sal forest, interspersed with extensive meadows, grassy plateaus, and areas of wild bamboo.  This region is known as "Kipling Country" and is where all his stories of the jungle were conceived.  In the afternoon, you will enjoy your first jeep safari in the National Park.

After breakfast, we will drive to Bhandhavgarh National Park (approximately 255 km / 6 hours).  On arrival, you will check in at the hotel.  Set amidst the Vindhyan ranges and the eastern flank of the Satpura hills, Bhandhavgarh National Park is one of the best places to see and enjoy wildlife in India.  In fact, the park has the highest relative density of tigers of any of India’s reserves.

After breakfast, we will drive to Khajuraho (approximately 245 km / 5 hours). On arrival, you will check in at your hotel.

In the afternoon, we will visit the Eastern & Western Group of Khajuraho Temples, which consist of an impressive group of artistic temples built in sandstone. The sculptures of Hindu deities, dancers, and musicians appear to be so natural as if they would come alive any time. You will visit the Varaha Temple, and the Lakshmana Temple, both dedicated to Vishnu. You will also visit the Kandariya Mahadeva Temple, which is not only the largest of the temples, it is also artistically and architecturally the most perfect. The Kandariya Mahadeva Temple represents Chandella art at its most finely developed phase.

After breakfast, we will drive to Jhansi railway station (approximately 210 km / 4 hours) to board the Shatabadi to Agra.  On the way, we will stop in Orchha to visit this beautiful medieval town, once the capital of Bundela kings.  Built along the banks of the river Betwa, flowing through a rugged country century side, Orchha retains the captivating air of a bygone era.  Amongst the various imposing edifices, of particular interest are the Jehangiri Mahal, built by Raja Bir Singh Deo to commemorate the visit of Mughal Emperor Jehangir, and the Raj Mahal and the Laxmi Narayan temple, both noted for their fine frescoes and mural paintings.  Later, we will continue to Jhansi railway station and board the train to Agra.  On arrival in Agra, we will transfer you to your hotel.

In the early morning, you will visit the Taj Mahal at sunrise! Taj Mahal was built by Emperor Shah Jahan over a period of 17 years, in memory of his beloved late wife Mumtaz Mahal. A UNESCO World Heritage site, the Taj Mahal is one of the wonders of the modern world and you will be enthralled with its ethereal beauty. NOTE: The Taj Mahal is closed on Fridays.

Later this morning, we will visit Agra Fort. Agra Fort is another dimension to the city that attracts tourists in hordes. Built by Akbar in red sandstone when he was through with the consolidation of his power after accession to power in 1654, Agra Fort worked both as a military strategic point as well as the royal residence. Many of the palaces inside the fort were later added by next generations of Mughal emperors like Jahangir and Shahjahan.

In the afternoon, we will drive back to the airport in Delhi (approximately 200 km / 4 hours) so you can board an evening flight home.

8-Day Tigers to the Taj: The Tigers of India with Khajuraho
from $1795 USD