Kenya Where To Go

Home to a variety of wildlife, the Masai Mara is one reserve where you can see the “Big Five” in a single morning. The Masai Mara stretches out over a flat grassy plain and is most famous for its annual migration of millions of wildebeest.

Photographic opportunities are endless. Many species of wildlife are comfortable with the game viewing vehicles and come up close for the perfect picture.

A visit to a hospitable Maasai village gives your Masai Mara safari a cultural edge. The Maasai live a traditional way of life in a “Manyatta”, living in simple mud covered straw huts. With over 500 species of bird life and open scenery the Masai Mara should definitely form part of your Kenyan safari.

Amboseli lies immediately North West of Mt. Kilimanjaro, on the border with Tanzania. Amboseli was established as a reserve in 1968 and became a National Park in 1974. The Park covers 244 square miles and forms part of the much larger 1,864 square mile Amboseli ecosystem. Large concentrations of wildlife occur here in the dry season, making Amboseli a popular tourist destination. It is surrounded by 6 communally owned group ranches.

The National Park embodies 5 main wildlife habitats (open plains, acacia woodland, rocky thorn bush country, swamps and marshland) and covers part of a pleistocene lake basin, now dry. Within this basin is a temporary lake, Lake Amboseli, that floods during years of heavy rainfall. Amboseli is famous for its big game and its great scenic beauty – the landscape is dominated by Mt. Kilimanjaro.

Lake Nakuru is a very shallow strongly alkaline lake 39 square miles in size. It is set in a picturesque landscape of surrounding woodlands and grasslands next to the town of Nakuru. The landscape includes areas of marsh and grasslands alternating with rocky cliffs and outcrops, stretches of acacia woodland and rocky hillsides covered with forest on the eastern perimeter.

The lake catchment is bounded by Menengai crater to the north, the Bahati hills to the north east, the lion hill ranges to the east, eburu crater to the south, and the mau escarpment to the west. Three major rivers, the njoro, makalia, and enderit drain into the lake.

Lake Nakuru was first established as a bird sanctuary in 1960 and upgraded to National Park status in 1968. A northern extension was added to the park in 1974 and the lake was designated as a Ramsar site in 1990.

The Aberdares are an isolated volcanic range that forms the eastern wall of the rift valley, running roughly 100km north south between Nairobi and Thomsons Falls. Soils are red and of volcanic origin, but rich in organic matter. There are two main peaks, Ol Donyo Lesatima (3,999m) and Kinangop (3,906m) separated by a long saddle of alpine moorland at over 3,000m. The topography is diverse with deep ravines that cut through the forested eastern and western slopes and there are many clear streams and waterfalls.

The National Park lies mainly above the tree line running along the 10,000ft contour with some forest and scrub at lower altitude in the ‘salient’ area near Nyeri with the boundary running down to the 7000ft contour

The unusual vegetation, rugged terrain, streams and waterfalls combine to create an area of great scenic beauty in the National Park.

Tsavo park is a vast expanse of savanna stretching from Mtito Andei, along the Mombasa-Nairobi road and south to the Tanzanian border. The North Eastern boundary along the Highway adjoins Tsavo East National Park, but Tsavo West has a more varied topography and a more diverse array of habitats than its neighbour.

There are numerous rocky outcrops and ridges and part of the park, towards the Chyulu Hills is the recent volcanic origin with lava flows and ash cones including the Shetani lava flow, an example of a recent volcano.

In the far south western corner on the Kenya Tanzania border is Lake Jipe, part of which is in the park. This very attractive lake is fed by runoff from Mt. Kilimanjaro and the North Pare mountains.

At Mzima Springs, in the North of the park, water that has filtered underground from the Chyulu Hills gushes from below a lava ridge into a series of clear pools.

Lake Naivasha is a beautiful freshwater lake surrounded by thick papyrus. The lake and its surroundings are rich in natural bounty, and the fertile soils and water supply have made this one of Kenya’s prime agricultural regions.

Much of the lake is surrounded by forests of the yellow barked Acacia Xanthophlea, known as the yellow fever tree. These forests abound with bird life, and Naivasha is known as a world class birding destination.

The waters of the lake draw a great range of game to these shores. Giraffes wander among the acacia, Buffalo wallow in the swamps and Colobus monkeys call from the treetops while the Lakes large hippo population sleep the day out in the shallows. 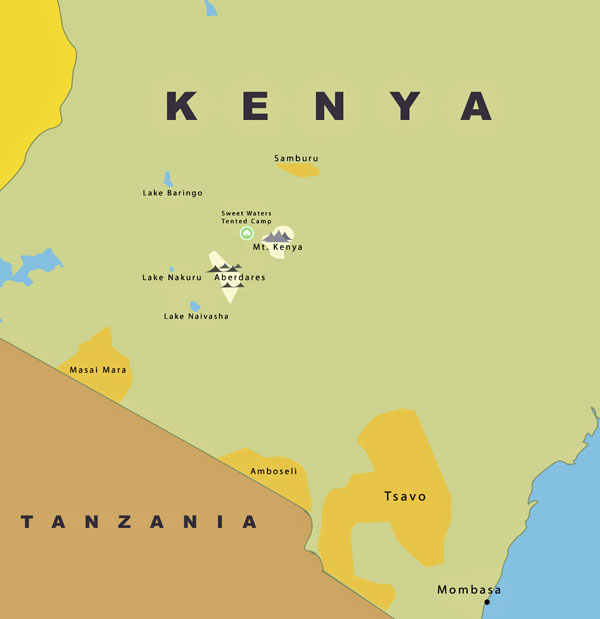 All Safaris
Adventures Within Reach. Copyright 2023. All Rights Reserved