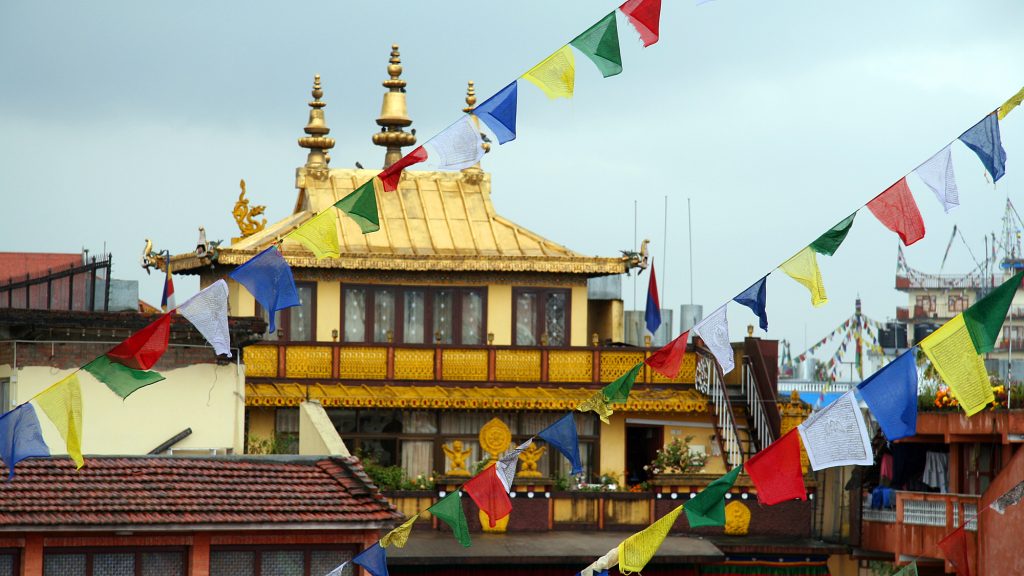 Situated 5 Kilometers east of Kathmandu city, Pashupatinath temple is one of the holiest Hindu temple dedicated to Lord Shiva. Situated amidst a lush green natural setting on the bank of the sacred Bagmati River, the temple built in pagoda style has gilded roof and richly carved silver doors. Visitors will be permitted to view the temple from the east bank of Rivers Bagmati, entrance in the temple being strictly forbidden to all non Hindus. Pashupatinath is the center of annual pilgrimage on the day of Shivaratri which falls in the month of February / March. Behind the temples are the cremation grounds.

This stupa, eight kilometers east of Kathmandu City is one of the biggest in the world of its kind. It stands with four pairs of eyes in the four cardinal direction keeping watch for righteous behavior and human prosperity. This Buddhist stupa was built by King Man Dev at the advice of Goddess Mani Jogini. It is built on an octagonal base inset with prayer wheels. The shrine is ringed by houses of Lamas or Buddhist priests.

In the afternoon visit 2000 years old Buddhist shrine Swyambhunath, situated on the top of the hill west of the city the most popular and instantly recognizable symbols of Nepal. The temple is colloquially known as the "Monkey Temple". There are many small buildings and shrines down the hillside behind Swayambhunath. Rest of the day free to explore on own.

Kathmandu's Durbar Square was built primarily in the 16th and 17th centuries. Like Nepal's other Durbar Squares, it contains a royal palace (a "durbar") and many temples built in a traditional Newar, pagoda style. On the southern border of the square lies the Kumari Chowk (House), home to Nepal's "Kumari" - a prepubescent girl chosen as the living incarnation of the Hindu goddess, Taleju. Once the Kumari reaches puberty, another 3-5 year old girl is chosen in her place. In the meantime, the Kumari is worshipped as a living goddess, but leads a cloistered life and emerges only several times a year for religious festivals. Her feet are never allowed to touch the ground.

Bhaktapur, a history-soaked medieval town, is also a UNESCO World Heritage Site. Founded in the 9th century and shaped like a conch shell, the city boasts an array of temples overlooked by the Palace with its fifty-five windows built by King Bhupatindra Malla. It is the best preserved of the three original cities of Kathmandu Valley, the other two being Kathmandu and Patan.

Changunarayan - Situated at the end of the long road which runs well into the valley, it is said to have been built in 323AD by King Hari Dutta Varma.The temple is richly decorated with sculptures and carvings. It is said to be the oldest temple in the valley.

Patan is a small city bordering Nepal's capital, Kathmandu. The highlight of the city is its dense Durbar square, a collection of temples concentrated in a tiny area. The entire east side of the Darbar square is dominated by the ancient royal palace complex. Damaged by war and particularly by the earthquake of 1934, it has been carefully reconstructed by the Nepalese government. The ancient city of Patan, lying 5 km southeast of Kathmandu, is known as the city of fine arts. The city is full of Hindu temples and Buddhist monuments. The diversity of the medieval culture that allowed both Hinduism and Buddhism to flourish has left a rich legacy of impressive sightseeing in this city for today's visitors.

Situated at the foothills of Phulchowki, Royal Botanical Garden has a splendid natural beauty. The road from Patan city runs to Godavari to the south-east, passing through the small, old towns of Harisiddhi, Thaiba and Badegaun. It is the only in Nepal, is open daily including Saturdays and government holidays.

Barely 10 kilometres south from the heart of Kathmandu, stands a small but graceful Bungamati village which welcomes you with wide and open arms. The ancient village came into existence as early in the 7th century. If we turn the history pages, we'll find that the village was known as Bugayumi, an autonomous province in Kathmandu Valley. Regardless of the rapid changes in lifestyle of the urban population and the globalized way of living, the Bungamati locals have remained untouched by modern waves and are living the life that they know best -- simply rural -- from the past several centuries. It is here that the Rato Machendranath statue spends half of every year (it is in Patan the other half of the year). Between the Rato Machendranath Temple in Bungamati is the Karya Binayak shrine, one of Kathmandu Valley's most important shrines. The Ganesh in this shrine is actually a natural stone that looks only vaguely like an elephant, but the view from the shrine is breathtaking. Khokna, a small Newari Village in southern Kathmandu Valley.


NOTE: Prices are per person in U.S. dollars based on double/triple occupancy. All quotations are based on the current rates of park fees, VAT, other government taxes, and current exchange rates. Should any of these be increased or a new tax introduced, these increases will be added on even if your trip has already been paid for.