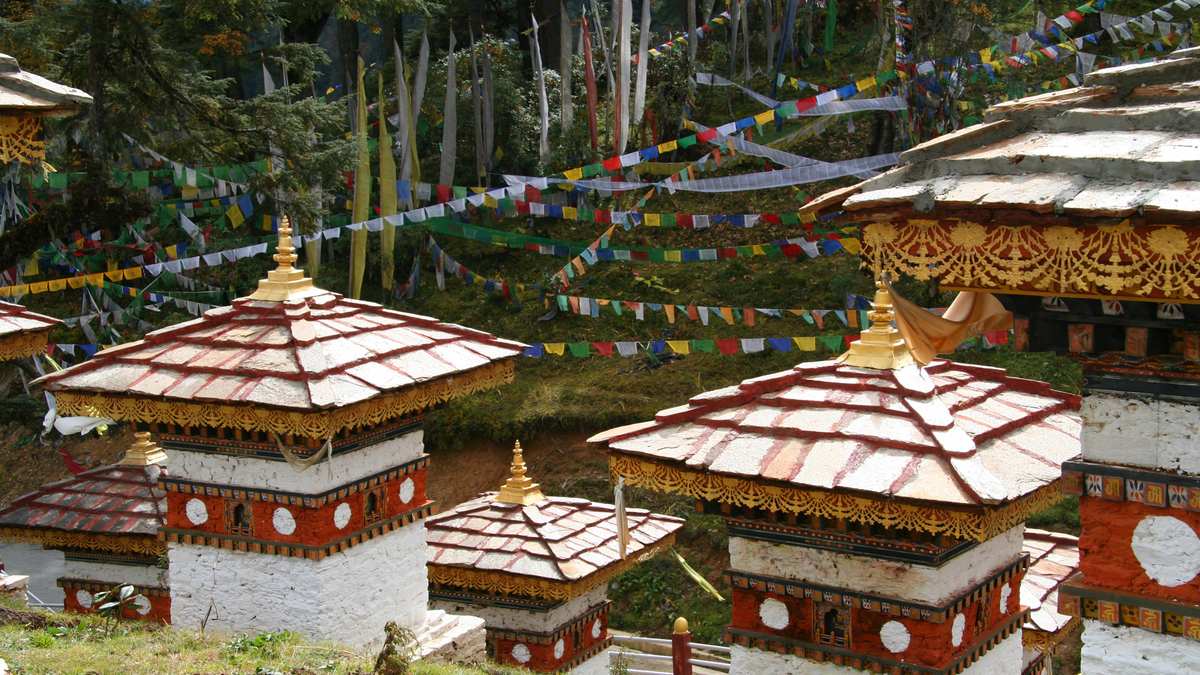 8-Day Cultural Tour Driving to Bumthang Valley and Flying Back

8-Day Cultural Tour Driving to Bumthang Valley and Flying Back

Eight days of cultural tours including Paro, Thimphu, Gangtey, and the Bumthang Valley

On arriving at the Paro International Airport, your tour guide will meet you and escort you to Thimphu, the capital city of Bhutan. The one-hour drive to Thimphu takes you on a winding road along the Paro and Thimphu River with views of lots of beautiful hamlets. Just before reaching Thimphu, you will visit Tashichho Dzong (dzong means fortress). This impressive fortress/monastery houses the secretariat building, the throne room of His Majesty the King, and various government offices. It is also the summer residence of the Chief Abbot and the central body of monks. It was rebuilt in the early 1960's after a fire destroyed most of the building. The amazing thing about this building is that it was built without a single drawing or a single nail!

First, you will visit Memorial Chorten, also known as the Thimphu Chorten, a large Tibetan-style Buddhist Monastery. The Memorial Chorten is a popular landmark in the city with its golden spires and bells. The building of this landmark was envisaged by the third king, His Majesty Jigme Dorji Wangchuck. Completed in 1974 after his untimely death, it is both a memorial to the late king ("the father of modern Bhutan") and a monument to world peace. Next, you will visit the Folk Heritage Museum, which is housed in a three story 19th century traditional earthen and timber building. Established in 2001, the museum provides a glimpse into the traditional Bhutanese culture and way of life. On the way to Punakha, you will drive past Do Chula Pass (3,150 meters). On a clear day, you can see the breathtaking views of the whole range of Eastern Himalayan Mountain ranges. Later, you will visit Chimi Lhakhang (the fertility temple) where childless women go to the temple to receive blessing from the saint. It was built by Saint Drukpa Kunley (Divine madman) in 1499. Legend has it that he subdued the demoness of the Dochu La with his magic thunderbolt of wisdom. A wooden effigy of the Lama's thunderbolt is preserved in the Lhakhang. To finish off your busy day, you will visit Punakha Dzong, built by Shabdrung in 1637. Punakha Dzong has undergone flooding from a glacial lake high above in the mountains of Lunana, which periodically has broken through its barriers, and has been ravaged by fire, but it has stood on its remarkable site since the 17th century. The flash flood of October 1994 caused a great deal of damage but miraculously spared the statue of Lord Buddha. The three-story Machhen Lhakhang is a fine example of traditional architecture, crafted from cypress with four intricately embossed entrance pillars decorated in gold and silver, the inside walls are covered with elaborate murals depicting the teaching of the Buddha. The Chorten which contains the Kudung is adorned with precious jewels and took twenty craftsmen four years to construct.

After breakfast, you will leave Punakha and drive to Gangtey (78 km/3 hours). Gangtey is a beautiful meadow where you can experience breathtaking views of the Black Mountain range. Phobjikha Valley is the winter habitat (late October to early March) of the rare and endangered Black Necked Cranes. In the center of the valley and rising on a small ridge stands one of the oldest private monasteries in Bhutan, Gangtey Goemba, which was founded in 1613. You will also have the opportunity to see yaks grazing from the highland pastures and black-face langur monkeys playing in the surrounding trees.

You will depart early this morning for the longest drive of the trip, (135 km/5 hours). crossing three Himalayan passes before reaching the sacred Bumthang Valley. Don't worry, you will stop at Pele La Pass (3,300 meters high) to stretch your legs and for tea at Chendebji Chorten, an ancient shrine. You will also stop for lunch at Trongsa Dzong, the ancestral home of the royal family and the watch tower, built in 1649. It is now the administrative seat of the district and the home of the monastic school. This architectural wonder was a vigilance point for both eastern and western threats. The watch tower, located directly above the dzong, has on display many interesting armors and other war artifacts used by ancient warriors. After lunch you will drive through the fertile Chumney Valley and also visit the village of Zugney, where you will have the opportunity to buy the local yak wool fabric.

This morning, you will embark on a walking tour in the beautiful Bumthang Valley. You will visit three ancient and sacred monasteries, Jambay Lhakhang, Kurje Lhakhang, and Tamshing Lhakhang. Tamshing Lhakhang is of particular note because, in March 2012, the monastery was submitted for inscription on the UNESCO World Heritage List. You will end your walk back at the hotel.

You will fly back to Paro on an early morning flight. Once back in Paro, you will visit the National Library of Bhutan, which collects and preserves important documents on Bhutan. The library also contains a representative collection of English and other western language books mainly related to the Himalayas, Bhutan, and Buddhism. Later, you will visit Paro Dzong, also known as the Ringpung Dzong, which means "fortress on a heap of jewels," and is one of the finest examples of Bhutanese architecture. It is also the administrative seat of the district of Paro. The Paro Dzong was built in the 16th century on the foundation of a monastery built by Guru Rinpoche and was used on numerous occasions to defend the Paro Valley from invasions by Tibet. You will also have the opportunity to take a stroll in downtown Paro this afternoon, before returning to the hotel.

Today, you will hike to Taktsang Monastery, also known as the Tiger's Nest. This magical monastery clings to a vertical granite cliff 3000 feet above the valley floor. The primary monastery was built around Guru Rinpoche's meditation cave in 1684 AD by Gyaltshe Tenzin Rabgay. Legend has it that Guru Padmasambhava, the tantric mystic who brought Buddhism to Bhutan in 747 AD, flew here on the back of a flying tigress. The old monastery, unfortunately, was destroyed by fire in 1998, but has been completely restored. The hike takes about 4 hours round-trip. Once you reach the view point of the Monastery, you have the option to visit the Monastery, which takes about another hour to reach. Next, you will visit the Kyichu Monastery built in the 7th century. This is one of the oldest monasteries in Bhutan built by the great Tibetan King Songsten Gyepo and the main statue is of the Future Buddha which is similar to the main Buddha statue in the Potala Palace in Lhasa, Tibet. Pilgrims turn the many prayer wheels along the walls as they circumnavigate the temple. The statues of the Bodhisattvas and the Buddha are national treasures. The wooden floor of the sanctum is inlaid with turquoise and coral gemstones offered by pilgrims. Last, you will visit the ruined Drugyal Dzong, whose massive ruins offer insight into the unique construction of Bhutan's famous fortresses. From its ramparts, the Bhutanese repelled Tibetan invaders. Weather permitting, you will have great views of Mt. Chomolhari at 24,000 ft.